I had posted that I hadn't seen anyone thinking about playing a MOSAIC Strict game, and Matt Bohnhoff replied that he thought it was because no one had made a chargen system. And duh, he was totally right. So I knew I had to make one. And this is it. It's the fourth MOSAIC Strict system I've made.

Let me know what you think!

Minimum price $3.00. Suggested price $4.00. But if the price  is a hardship to you, please email me at paul@halfmeme.com, or DM me on Twitter @paulczege, and I'll get you a download key, no questions asked.

Art by by Jesús Langarica.

In order to download this game you must purchase it at or above the minimum price of $3 USD. You will get access to the following files:

You Are What You Eat for MOSAIC Strict by Paul Czege.pdf 654 kB

I've never played a table top before except light dnd, what is a MOSAIC strict game

A tabletop RPG designer named Michael Prescott proposed that people design stand-alone RPG subsystems that groups could mix and match together to create their own custom ruleset for play. To me that means the systems can have an effect on the shared story, and can be triggered for use by things that happen in the shared story, but can't otherwise interact mechanically with each other. So, like, one subsystem for character creation can't tell you to create a character with hit points that another subsystem for poisons tells you to reduce. I think it's a super fun design space. Theoretically the ones I've made can be mixed and matched with ones by other designers.

Incredibly nerdy, very cool, thank you for the response 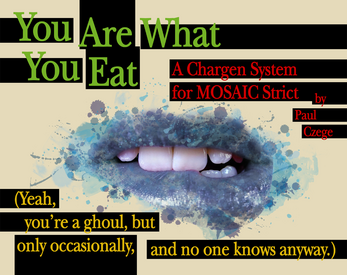 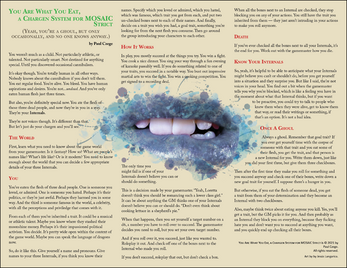